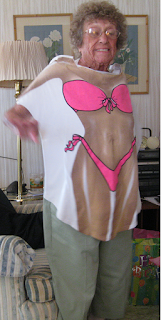 I never thought that I would be wiping my mom's backside and changing her diapers just like she did for me when I was a baby.  But, cancer doesn't discriminate and it doesn't give any mercy.  I was privileged enough to care for her the last few weeks of her life.


My mom grew up during the depression, but I never heard her complain about her life back then.  I do remember some stories about her father throwing tomatoes at the engineers of passing trains and then picking up the coal that they threw back  at him; but these were humorous stories, not stories about how bad life was back then.
I think my mom's one big regret was that she never went to college.  She was so smart that by starting school at an early age and skipping at least one grade, she finished twelfth grade at age fifteen.  The law said she had to stay in school, so she had to go back for a thirteen grade.
I was the first person in my family to ever go to college, so my mom didn't have anyone to council her about her opportunities.  At sixteen, she went out and got a job to help support her family and college was just another dream that went up in smoke with the start of WWII.
After the war she got married, had children, became a stay at home mom and never worked again.  I would have to say that by living until she was ninety, she had a pretty good life.
Unlike my dad, who died way too early, she did get to see a Red Sox World Championship in her lifetime!
Check out this video of her 90th birthday party to see how full of life she was – nine months later she was gone.
Logically, she had a great life and was at peace with the world and was ready to go.
So, why was my first reaction to question God, "Why do you have to take her now?"
It makes no sense that I was ready to lash out at God.  Maybe, the entire puzzle that we call life seems to sometimes be so overwhelming, that God is the only one we can blame.
*****
If you liked this blog post I know you will love my Hating God Trilogy. Please go to Amazon where you can read for free “Hating God”, “Ignoring God”, and “Loving God” if you subscribe to Kindleunlimited.