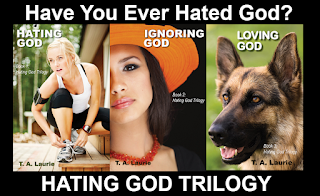 “Why do bad things happen to good people?” is probably the most asked question in human history.

Devastated by the loss of her parents to a drunk driver at age twelve, Susan has hated God for many years. Surrounded by the doctrine of a liberal Woman’s Studies Department, Susan doesn’t seem to believe in God anymore.

Who is this strong, godly man, Carl Spenser, who Susan is attracted to like a flower to the sun? And why is she so jealous of Maria Alvarez, who seems so close to him? Carl gave his feet to his country in Afghanistan, and Susan can’t understand why he doesn’t hate God; perhaps she believes in God a little bit more than she thinks?

The second book of the Trilogy, Ignoring God, focuses on sexual assault and all the hurt it causes, not only to the victim, but also to the victim’s family and friends. Susan and Carl can’t understand why Maria won’t positively identify her attacker, so they team up to try and find him. A big problem is what will Carl do to the attacker if he finds him and what condition will he be in when he is turned over to the police?

This book introduces Carl’s support dog, Sgt. Timms, a huge German shepherd and an Iraqi war veteran who still suffers from PTSD. Carl Spenser, an Afghanistan war veteran double amputee still has his problems. They are a match made in heaven and are best friends; who takes care of whom is the big question. The only thing Sgt. Timms can’t understand is why Carl and Susan Buckley aren’t together; their bond continues to smolder throughout this book.

The final book of the Trilogy, Loving God, is a whirlwind of drama and struggle. Vexed by Carl’s rejection, Susan lashes out at him by joining with a married Professor, finding her desires lead to undesired returns. With so many seeking love and belonging, suffering through the consequences of their actions, will God's plan for their lives be found, and will it be worth it?

Maria gives birth to two healthy babies and settles into the hard life of a single mother. Her visit with the babies’ father in jail is larger-than-life and what happens to him is mind-boggling.

If Sgt. Timms gets what he wants then there might even be a happy ending.